6 Reasons to Relocate and Live in Maine or New Hampshire

As people living in and loving Maine and New Hampshire, we personally recommend and love these states.  After all, we have chosen to raise our families, own our homes, and pursue our careers here. There are also a lot of good, objective reasons to move, too!

There is a trope in media depictions of Maine of friendly neighbors and quiet towns.  Though this might be exaggerated in some ways, it’s a fact that Maine and New Hampshire are distinguished even from neighboring New England states by their incredible safety.  In fact, Maine Ranks #1 overall for public safety among the 50 United States, with the lowest violent crime rate and the 4th lowest property crime rate. New Hampshire ranks in at #2 overall, with the second-lowest violent crime rate and the second-lowest property crime rate.

If you’ve been living in a major metropolitan area and you’re thinking about starting a family, this might be a huge factor for you.  If you want the idyllic sense of security that seemed so commonplace in the mid 20th century, and so rare since, Maine and New Hampshire are excellent states to move to.

Maine isn’t as inexpensive as it once was, but it remains one of the best places to live, with good wage-to-cost ratios in most communities.  With an unusually high minimum wage at more than $12 an hour statewide, there is a lot to be said for the affordability of Maine.  This is a big factor in many of the recommendations made by major publications and organizations suggesting Maine as a great place to settle down.  Portland, Maine topped Forbe’s Magazine’s list of most livable cities in 2009, and it has stayed high on most such listings to this day.  Recently, US News ranked Portland as the 8th most livable city in the country.

New Hampshire makes many similar lists, too.  Manchester was featured as one of US News’ 50 best places to live in the US in 2020.  Overall, New Hampshire is frequently ranked in the top five best states to live in, with a ranking for 2021 of #4 in the country.

Maine and New Hampshire offer tens of thousands of acres of woodland between them, with approximately 90% of Maine being wooded! That makes for spectacular, even legendary, Autumn foliage.  The annual pilgrimage of more Southerly New Englanders to Maine and New Hampshire for leaf peeping is a very well-known tradition.

The beauty isn’t limited to the Fall, though that time of year is especially famous.  Both of these gorgeous states have four very distinct seasons, with a Spring that sees the brown of bare trees and winter grass replaced with lush greens and bright wildflowers, a Summer that features beautiful beaches and outdoor recreation opportunities like hiking the Appalachian Trail, foliage-filled Fall, and typically a white winter with dozens of inches of snow over the course of the winter.  If you’ve been missing the seasons, or white Christmases you remember from childhood, a move to Maine may be just what you need. 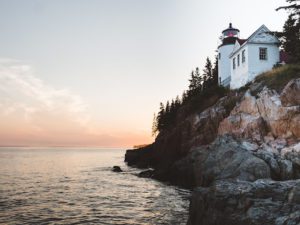 Maine has more coastline than any other of the lower 48 states with about 3500 miles of coast.  Only Alaska has more among US states.  Even California, taking up almost two-thirds of the West coast has less than one-third the coastline Maine has!

Hard to believe? Well, though it may not look too impressive on the map, Maine’s rather large.  In fact, its largest county, Aroostook, is larger than Connecticut and Rhode Island combined.  That count also includes all the inlets and islands that dot Maine’s coast. While it may seem like cheating, the fact is that traditional coastal towns exist not only at the Easternmost extremes of our coasts, but dot the various inlets being considered.

While New Hampshire has much less quantity of coast (about 0.4% as much coastline overall), they make use of every inch, with many accessible beaches and well-developed coastal towns.  There’s also a lot of culture, art, and food along the coasts of both states.  Speaking of…

There are a lot of New England classics to be found: clam chowder, lobster rolls, Italian subs, whoopie pies, blueberry pies, and so on.  These delicacies are often much more affordable in Maine and New Hampshire compared to other places. After all, Maine supplies approximately 90% of the nation’s lobster!

It used to be that Maine and New Hampshire were dominated by diners and comfort food. However, In the last 20 years, the food scenes (especially around cultural hubs like Portsmouth, NH, and Portland, ME) have exploded.  It use to be a challenge to find decent Chinese takeout. Now you can find world-class eateries featuring Italian, Indian, Thai, Japanese, and other exotic cuisines.

Plus, if for some reason you can’t find exactly what you want, there’s always Boston, less than 2 hours South of Maine, and practically a stone’s throw from coastal New Hampshire.  Which brings us to our last reason.

While Maine and New Hampshire don’t boast major metro areas that would impress someone from Los Angeles or New York, it’s also quite close to both Boston and New York.  This means you don’t have to choose between idyllic country life and a major urban career.  With telecommuting either from home or from one of the many coworking spaces popping up in Maine and New Hampshire’s cities, it’s easier than ever to have your cake and eat it too.  Many of the newest Mainers we meet are still working for their firms based out of major cities, and occasionally flying out for big meetings.

If you’re ready to make a permanent move to Maine or New Hampshire, you should consider contacting us to get prequalified for your home loan.  At Integrity Mortgage we personally understand the reasons you want to come to this Northeastern corner of the states and want to help you get into your new home as soon as you can!